Television has, in the last quarter-century, become a medium with incredible potential for impactful storytelling. Importantly, it’s also become one of the most widely successful. Video games were a lot quicker on the draw; it’s taken them only 40-odd years of existence to begin communicating meaningful, resonant stories to their audience.

With the multimedia marketing potential they offer individually, it’s natural that they would cross paths eventually. They already have: the two have flirted in the past, primarily in the late ’80s to mid-’90s, with spinoff or tie-in cartoons starring our favorite plumbers and hedgehogs. Those casual encounters have been – and do not misquote me – unilaterally, irreconcilably charred horse shit.

Both mediums and their storytelling capabilities typically suffer from these tie-ins because each apparatus is fundamentally and rhetorically different. Instead of telling one cohesive story – instead of building a single world and living together in it – these projects lead by sharing properties and assets with the intent to emulate the experience of one with the toolset of the other.

Remedy Games’ Quantum Break asks whether television serials and narrative-driven video games can be more than roommates, instead coexisting as sympathetic systems within one organism. “Why not make them the same thing?” poses Remedy, thrusting its hand in the air eagerly.

Then, it takes eight hours to admit that it doesn’t know the answer. Quantum Break unfolds its story – time is breaking, one man can save the world from the evil corporation that seeks to exploit the literal end of days – through both traditional in-engine cutscenes and four primetime-length episodes of a live-action drama serial. The lines between game and show are clearly delineated without so much as a game-models-to-live-scene transition to connect the two stylistically.

Still, watching the cast carry the story through both mediums can be fun, and Lance Reddick (as an evil VP biding his time in a long-term power play) and Courtney Hope (a time-traveling double agent embodying the game’s pathos) lead a critically underdeveloped supporting cast as the story’s two most interesting characters. But while seeing real-life performers juxtaposed with their polygonal avatars starts out looking like a neat trick, but it’s not long before the disparities between the two become an uncanny object of focus.

Aside from the problems endemic to electronic effigies, the story doesn’t have any breathing room, even when spread across two mediums. In fact, collectible text logs include so much complementary information that they could be considered a third medium through which Quantum Break’s story is told if they a) weren’t so damn long and b) had some kind of payoff in the show portion. Even those can’t help prop up the supporting plot threads, partly because of these readability concerns. 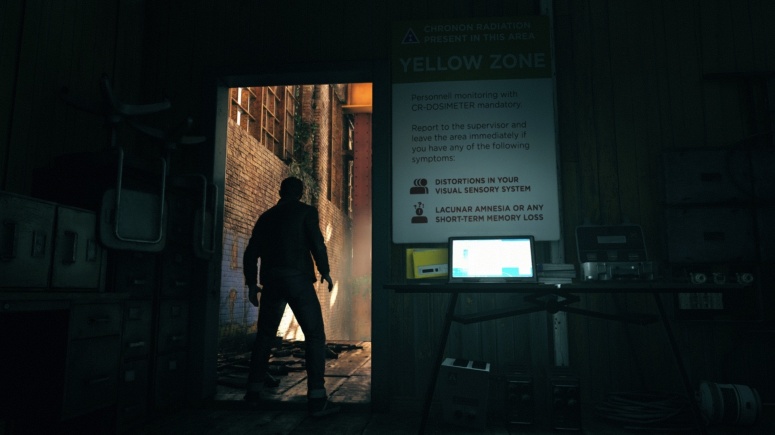 That’s a common thread throughout Quantum Break: though interaction with the story is one of the game’s touted features, it’s a one-sided relationship. Distinct choice points in the game, known as Junctions, place the player in the antagonist’s shoes (visually filled by Aidan Gillen) as he’s presented with two paths down which the story could branch.

These choices appear in-game and are controlled by the player. The ripples created in Junctions track in the story across both mediums, splitting the story thread and introducing or removing secondary characters. Like the story itself, it works, basically. It’s not much of an accomplishment, but it does create several different directions the story can take, even though those branches terminate in the same spot (in keeping with its “time is a closed loop” rules).

But merely making that story functional isn’t anything new. Quantum Break doesn’t add anything to the existing narrative paradigm it’s trying to penetrate – that of a splitting narrative – and its weak attempts are somehow less satisfying than if Remedy just hadn’t included them.

Along with text collectibles, certain manipulable objects can be found scattered throughout the game’s levels. When the player interacts with them (a simple button press, a line of dialogue, an animation), they’re shown a small mandala in the upper right-hand corner of the screen to let them know it’ll have consequences in the television show – that it’ll feed into the story, furthering the player’s agency in shaping Quantum Break’s multimedia narrative.

Except it doesn’t. Not really.

During my first playthrough, I got William Joyce (Dominic Monaghan, portraying protagonist Jack’s brother and the quantum physicist responsible for developing the technology that accidentally breaks time) to finish an erroneous timey-wimey formula on a whiteboard inside the evil corporate headquarters. “If they’d gotten this right in the first place, we wouldn’t be in this mess,” he said.

I saw the inch-square mandala eating itself in the corner of my screen and I marveled at the possibilities: When a theoretical physicist utters an idiom like “in the first place,” it should be a dead giveaway that you get to see that “first place” and maybe prevent the ensuing disaster.

After my first Junction, I awaited the outcome of that ripple. In the first episode of the television show, a member of the corporate cleanup crew remarks at the completed formula (I did that!) near the scene of the time-altering malfunction that it could’ve helped avoid. “Someone finished it,” says the goon. The camera pans back to the central discussion between bad guys, and the scene goes on without a whisper about the formula’s implications.

Each episode of the show features similarly unsatisfying nods to world objects – a sign of a dinosaur promoting the local football team, a radio drama I set on loop through the corporate PA – which are noted, verbalized, and forgotten forever.

This is Quantum Break’s biggest failure. Its half-measured integration of the television serial structure is purely masturbatory, disallowing the player from influencing the story in any unique ways (save those four scripted turning points) and hamstringing the game’s ability to build a responsive world, no matter how many mediums Remedy throws at it.

It seems that Quantum Break’s closed loop couldn’t make room for the player – for me – in pretending that our actions can make a difference.